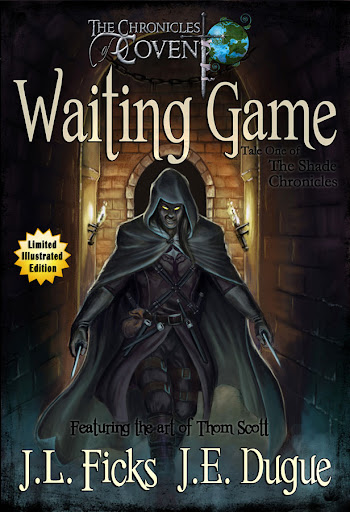 by J.L. Ficks and J.E. Dugue (illustrated by Thom Scott)


A fantasy adventure concerning a Dark Elf assassin and his latest target. A start to a greater work.

Synopsis
Shade is a Dark Elf assassin. He's growing bored -- nothing is a challenge to him anymore. When a Shamite nobleman hires him to defeat Warlord Lewd, the 'king' of Kurn's underworld, Shade hopes it'll bring him the excitement he needs.

First, he'll have to survive the trip to Kurn. As skilled as he is, it shouldn't be much of a challenge. But on the way he must pass through a haunted ruin, a deadly swamp, and then he must enter the city in disguise because he is a hated Dark Elf. Then, finally, he must find this "Warlord Lewd" and defeat him.

I found this book on DriveThru Fiction when I was browsing there for the first time. I saw the artwork and was interested from there.

The book's afterword describes it as a labor of love, and it certainly is. Just look at the website. These two authors are very excited to put their work out. They are attempting to build their own high fantasy world along the lines of Dungeons and Dragons and Forgotten Realms. As such, there are myriads of races and lands to be explored.

Waiting Game, then, is just one story in this world.

I didn't think I would like Shade because he seemed like the typical cocky assassin character, but as he comes into different battle situations, we see that he's not always so sure of himself. He gives off the appearance of being calm, collected, and fearless because that is the reputation he's built up and must maintain, even when he is almost paralyzed by fear of a new major foe. Although he is an assassin -- and a Dark Elf -- he's not a cruel man. He doesn't agree to violence towards women, for example.

This particular volume feels like it is light on plot but big on action. Shade is an assassin, after all, so there are plenty of different peoples and creatures for him to have to fight and kill throughout the course of the story. The story seems to be meant as an introduction to the world, laying down the brickwork as a hint of things to come. I believe some of the characters mentioned may be recurring characters in the world - the Faun, for instance, since he didn't serve much of a purpose aside from some small comic relief.

We're shown snippets from Shade's past, a little of how he came to be so skilled. It was interesting to see what little we did of Dark Elf society -- I can see it growing in the series' future.

The action scenes can be rather long and fanciful, if you like that sort of thing. Some scenes are accompanied by artwork done by Thom Scott. I wish my e-reader had a bigger screen!

I admit I'm not so much a fan of D&D-style worlds - but it's certainly a promising start, to say the least. I can definitely see it going places as the lore gets fleshed out.